Welcome and thanks for visiting my site. Primarily, my preferred genre is non-fiction and I am currently working on my first creative non-fiction novel, The Woman at the Well. You can find book excerpts below.

I was born in Chicago and raised in Tulsa, OK, the youngest of 10. At the tender age of four, I told my mom I was going to write a book. In 2005, after many wayward, and some not-so-wayward, adventures I finally made good on that promise with the publication of my first book Essays from Church volume 1.

I’m an Air Force veteran and former Christian minister. In 2006, I graduated from the University of North Texas with a BA in Radio, Television & Film. After graduation, I spent the summer doing freelance film & TV production gigs in LA and the surrounding area. In 2007, my newspaper column, The (still) Burning Bush, ran in the Oklahoma Eagle from 2007–2017. I love every aspect of storytelling and believe we all have a story worth telling.

When I’m not writing or reading, I can be found torturing myself with Shaun T’s Insanity®, cycling along Sacramento’s picturesque American River Bike Trail, or trying to satisfy my travel bug. You can follow me on Twitter, or email me directly at daniel@danieldhardman.com, or by using the form below. 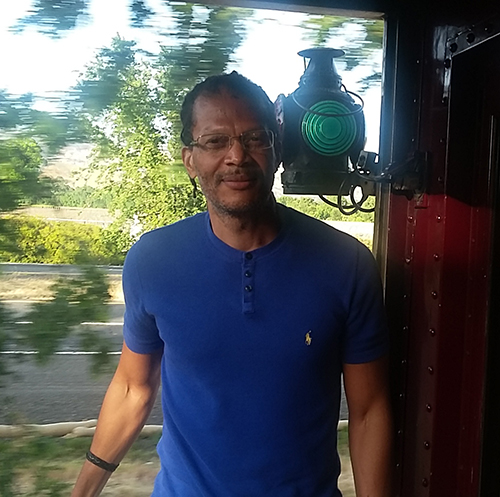 A collection of sermons that chronicle my awakening to the startling realities around me, and which bear witness to my passion for the truth as I struggled to reconcile the inconsistencies between the teachings of my faith and my real-world experiences.

Excerpt — “Rain has a spiritual presence as well as a physical one. The Old and New Testament prophets referred to the Holy Spirit as falling like rain. Why? Because rain is such a powerful force of nature. Not only does it bring and rejuvenate life, it also frees, liberates, and breaks oppression. Rain enables the seed to burst forth with life, liberating itself from the confines of the soil around it, and break the oppression of the darkness that would keep it from reaching its full potential. Rain refreshes the plant that had given up hope of seeing its fruit come to full growth, and breaks the oppression of the hot, unrelenting sun. We need a revolutionary rain today. African-Americans need a revolutionary rain to help us open our minds to life and growth instead of death. We need a rain from above that will, first of all, allow us to grow into ourselves. Who are we? We are descendants of Africans: not descendants of slaves only! When you put it into perspective, slavery is a very minute part of the African’s history. Before our ancestors were slaves, they lived free for thousands, possibly hundreds of thousands, of years. We are Africans!”
— Chapter One, Raining Revolution 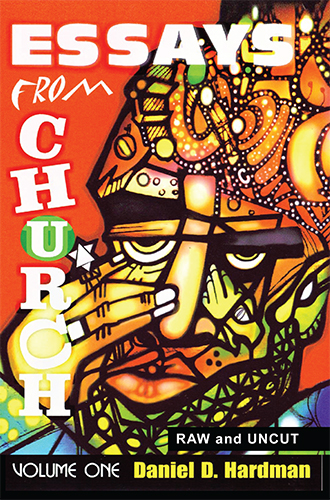 The 21st Century Bible is the result of that reconciliation sought in the Essays from Church Volume 1. It provides a simpler, clearer approach to faith and the world we live in.

Excerpt — Self-published author cracks the Bible code!
“In 1517, Martin Luther’s 95 Theses presented an unprecedented challenge to the Catholic Church’s authority, particularly the concept of indulgences—the requirement for parishioners to pay monetary tribute to obtain forgiveness. According to Luther, such practices directly impacted a believer’s salvation. His actions triggered the first great Christian reformation, and changed Christianity in ways no one could have imagined. Unlike Luther’s 95 Theses, I have only one: as people change so must their belief systems. I’m convinced current circumstances present compelling evidence that we are overdue for such a change. It’s my belief that humanity is in danger of losing itself in consumerism, escapism and war. The world we now live in is dramatically different from Martin Luther’s, even the world I was born into in 1964, yet despite the various reformations—Christianity, Judaism, etc.—by and large we still live under belief systems that are thousands of years old. Consequently, these systems have become mere backdrops in the lives of adherents.” 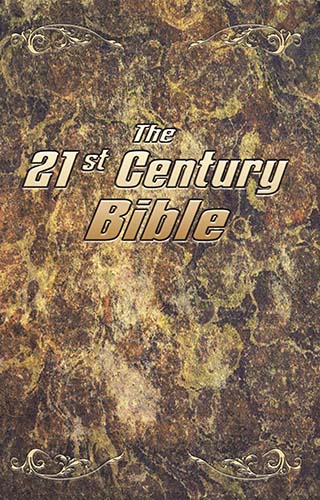 An critique of both the successes and failures of the African American community inspired by one of the best analytical minds of the 20th century, Harold Cruse.

Excerpt — “The Crisis of the Negro Intellectual is not just the title of one of the most important analyses of Black American life ever written. It’s also the perfect descriptor for the unrelenting malaise that continues to plague African American existence. According to Bazel E. Allen and Ernest J. Wilson III, foreword co-writers for its 1984 reprinting, Crisis author Harold Cruse lays down “a penetrating sociological analysis of contemporary groups and personalities” in traditional iconoclastic fashion. Cruse aimed to prepare the next generation of “actual and aspiring progressive black intellectuals” for the task of solving the crisis he so meticulously detailed. Cruse wrote Crisis in 1967, as the Civil Rights movement began to see the rise of groups like the Black Panther Party amid calls for Black Power. It seems many black Americans had come to view non-violent resistance as a strategy that had served its purpose, and to feel that more aggressive tactics were needed going forward. America’s historic transition from the post-WWII era into the Great Society has been punctuated by political assassinations, race riots and, despite their civil rights gains, as Allen and Wilson note, a tremendous “sense of loss of community” for black Americans.

When I read Crisis in 1993, Cruse’s wide-ranging critique and recommended solutions transformed my understanding of the black condition as well as my relationship to it, just as he intended. And while the debate about how to define the term “black intellectual” may continue for some time, I think most would agree that we, African Americans or Negros as in Cruse’s day, have not brought all of our strength to bear on the issues that have hounded us for so long. The days of both the Civil Rights and Black Power movements are long gone. And while the NAACP still clings to the long-outdated term “colored”, freedom for the descendants of American slaves still has not been fully realized primarily because the modern black intellectual class has failed to synthesize a cultural-political-social-economic vision to show black people what that freedom will look like. Like Cruse, I’m not only convinced that it is the black intellectual’s responsibility to cultivate, project and activate this vision, I believe the intellectual is the only one who can. Whatever anyone may think of my intellectual abilities, I do humbly consider myself to be a member of this group. Likewise, I consider it my responsibility to do my utmost to help in the development and execution of this monumental task. What follows is my account of my first attempt.”
— A Look Back at the Cruse Analysis 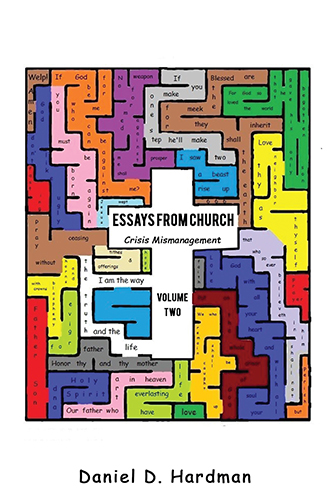 Essays from Church: Crisis of Compatibility

Men and women are not natural adversaries. It’s time we stop behaving as such.

Excerpt — “When I grew up in the 60’s and 70’s, gender roles were still quite rigid. It was a man’s job to provide and protect, and it was a woman’s job to care for the children and manage the home. So, in every relationship I’d ever been in I fell into that role without ever questioning it. After all, it worked for my parents. As I said previously, their marriage lasted 60 years. Gender roles were like computer programs that ran in the background. I never challenged the assumption that it was my job to pay rent, car payment, utility bills, cut the grass, repair the car, save for our future; everything that a man was expected to do, I did. And I loved it. In fact, in high school I believed I was born to be a husband and father. I was convinced that all I needed was my woman by my side. When I left home, I was searching for my rib. When the first wave of feminism hit in the late 19th century, it laid the groundwork for significant changes that would eventually reshape the social landscape. It ushered in radical ideas far beyond voting rights for women, but came to an abrupt end with the consummation of this particular goal. Male-female relationships escaped virtually unscathed. In the 1960’s when the second wave of feminism arrived, it left no gender-inequality stone unturned. So, the model we inherited from our parents was literally DOA because it still operated on pre-second-wave notions of gender roles that had been invalidated decades earlier. Theory no longer matched practice; everything was out of whack.”
— Chapter Two, The Man in the Mirror 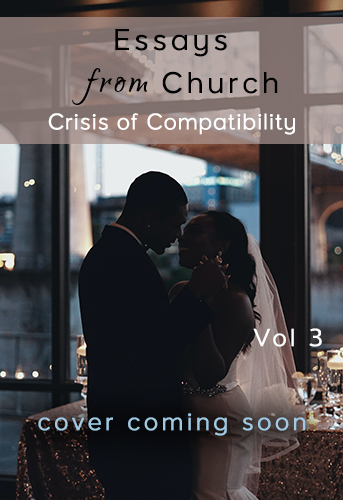 The Woman at the Well

Excerpt — “The sun rises over the trees that shade the well which lies east of the house. From the kitchen window Thelma sees the narrow trail made from by now thousands of trips to fetch water. Spring brings out the small yellow and white daisies that line the trail and cover the yard. As she makes her way to the well, tiny grasshoppers leap from beneath her feet flying in all directions. Some of them hit the large empty pail and make a hollow thud.

There is no water like the water from the well she thinks to herself, anticipating the cool, fresh, thirst-quenching power it possesses. She thinks of Danny, her youngest grandson, and how he likes to go to the well to fetch water too. “Grandmother, can I go to the well and get some water?” he always asks. “Sure. Put on my boots and watch for snakes.” “Yes ma’am,” he says. The boots are five sizes too big and he looks like a head and arms ambling down the trail. A small five-year-old, he tries to carry a full pail but usually makes it back with only about half. The rest is either spilled on the ground or in the boots. She misses him all the time and will be glad when he comes to visit, which is usually on weekends.

She reaches the well which is covered by a large, flat rock that was taken right out of the ground nearby. The opening extends just a few inches above ground. It’s not like wells you see in the movies with a high circular stone wall, small pitched roof and a fancy contraption to lower and raise the bucket. It’s just a plain old metal shaft but it’s special to her.

Thelma sets her pail down next to her feet, lifts the cap rock revealing the silver tube that is the well opening, then lays the rock on the ground next to it. One end of a chain is attached to a metal rod that’s been driven down into the ground, the rest of the chain lays coiled on a wooden board just inches from the well opening. The other end attaches to a long, slender, metal cylinder that hangs just inside the mouth of the well. She unhooks the cylinder and drops it into the well shaft. As the cylinder descends down the well toward the water below the chain makes a loud, rattling sound. Then comes a muffled splash when the cylinder hits the water about 30 feet down.

The sun has moved a little higher in the morning sky, its blinding glare filtered through the trees. As a slight breeze blows, a voice whispers, “You loved Bill more than any other.” Startled, Thelma looks around to see who is speaking to her. Straining at the sun’s glare through the branches, she thinks she sees a figure. Maybe all these years on the rock pile are finally getting to her.” 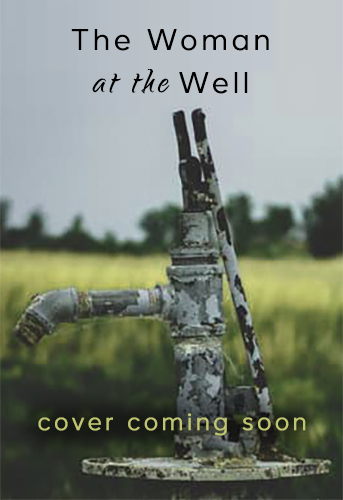 Screenplay
Special Kind of Crazy, feature-length screenplay, semi-finals in 2015 screenplay competition: a young woman longs to know the truth about her mother who disappeared long ago. Little does she know that once she does her life will never be the same.

Screenplay
The Absurd—short screenplay and film 2007: Black America in a nutshell.

Email Daniel at daniel@danieldhardman.com or use the button below.